Building and operating a machine learning system is a process that consists of many components and involves multiple specialists with various skill sets. The iterative nature and constant evolution of such systems amplifies the complexity to the point that it could become challenging to handle it even for a large and experienced team. Luckily, with the right tools at hands, it is possible to streamline this journey. Let’s take a look on how such pipeline could be built from the ground up.

This system operates in the online advertisement domain, which has the following entities:

The goal of the system is to predict which offer within a campaign has the highest posibility to convert for a specific user. It does so based on the historical data of conversions for each campaign. The assumption is that user metadata such as their geographical location and smartphone or computer traits correlate with the offer that they could be interested in. This is often the case when an offer is targeted for a specific country, mobile carrier or even a phone vendor.

The source code for this project alongside with the installation instructions is available in this GitHub repository.

The architecture involves three data flows: historical performance data is uploaded to a storage, realtime prediction and model training requests are routed to an API. Historical data is used to create machine learning models that perform predictions whenever a training request is received.

The whole system is serverless, except for the SageMaker inference endpoint. Amazon has recently announced serverless endpoints as well, but they don’t support multi-model deployments that this system relies upon. Each campaign gets its own ML model and all models are deployed into a single inference endpoint. This allows the system to scale to hundreds of campaigns per server, which makes it more economically feasible compared to a single-model deployment when each model requires its own server.

Dataset consists of conversion events in JSON format with the following structure:

This data is calculated based on client’s user agent and IP address, processed with an IP lookup database to estimate their geographical location and ISP.

In order to start making predictions for a campaign, we need to prepare a ML model for it. When and under what conditions a model preparation should be triggered is outside of the scope of this article. It could be based on a schedule or when a certain advertisement campaign threshold is reached, but we’re going to request it manually. In order to start the ML pipeline, you need call the API with a campaign ID:

It will spin up an AWS Step Function, which is responsible for extracting the data from a data lake and starting the SageMaker pipeline. The data is extracted using AWS Athena - a managed service that allows you to run SQL queries over distributed data sources, including traditional relational databases, NoSQL databases and, just like in this case, an S3 data lake with AWS Glue. Using Athena allows to easily switch to any supported DBMS depending on the business needs and to also use plain JSON files without any servers, which is ideal for this tutorial.

The Athena query is pretty straightforward:

The query results are stored in an S3 bucket and will be provided to the SageMaker pipeline that will be executed on the next step.

SageMaker Pipelines is a managed CI/CD service for machine learning. It is defined by the following DAG, each node of which represents a specific ML task.

The first step of the pipeline is data preparation (or wrangling) using AWS Data Wrangler, which has its own DAG:

On the first step of the process we’re going to get rid of rarely used web browsers and operating systems, since we will encode all unique values into separate columns and we don’t want to get a very sparse matrix as the result. Another reason for that is due to the nature of the business domain, such outliers often indicate bot traffic or traffic source targeting issues, and should be filtered out.

The histogram for web browsers before applying filtering looks like that:

Filtering out web browsers that account for less than 1% of the dataset provides the following result: 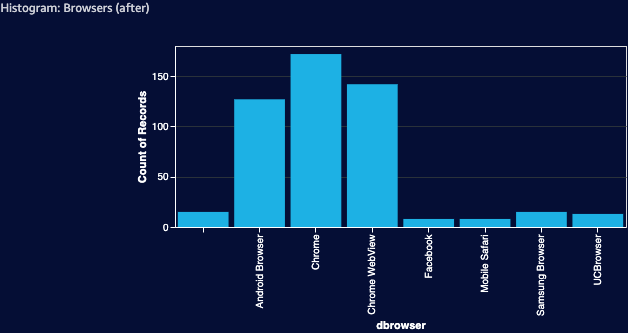 The same applies to countries. Most advertisement campaigns are usually targeted to a specific list of countries and displaying an ad to a user that does not belong to that list will prevent a conversion and will result in wasted money. Low conversion rate can also indicate that the specific campaign is just not very effective in this country, so it makes sense to cut those losses and focus on more promising locations.

In our case there are quite a few countries that don’t convert much: 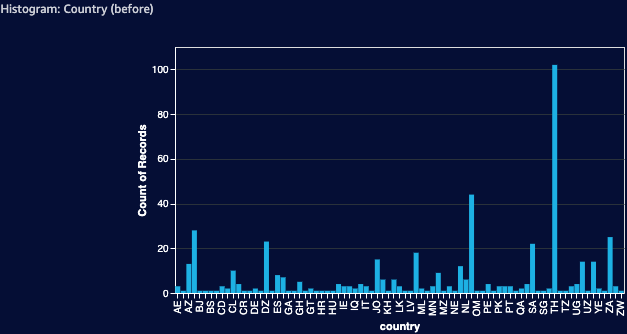 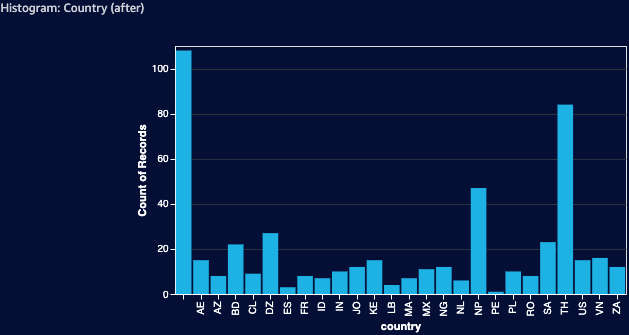 The next step is to make sure that categorical columns do not contain any characters that can result in processing errors. To achieve that, we will percent-encode them with a PySpark script:

The last step of the common branch of the DAG is to encode categorical columns. In order to train and use an ML model, we need to transform (or encode) non-numerical values to numeric representations. We will use two different approaches for offers and for all other categorical columns that we have. The offers column will be encoded using an indexer, which produces a single column that contains integers, corresponding to a specific offer:

As for the remaining categorical columns (country, OS, device type and web browser), we will use a one-hot encoding approach, resulting in a new column (with values of 1 or 0) created for each unique value within a category:

At this point we have reached the end of the common branch and the next steps will reflect transformations intended for a specific DAG output.

The first output that we need is a list of columns. To produce it, we’re just going to limit the number of rows intended for this output to one, so that the processing step won’t have to load a huge dataset file in order to just to get a list of columns in it:

The exact same approach is used to get the second output - a list of encoded offers that we created earlier. The only difference is that the output will only contain two columns (index and offer ID) and everything else will be removed.

The last three outputs are samples of our dataset for ML model training, validation and testing. They are created by splitting the dataset in a proportion of 70%, 15% and 15% respectively:

That concludes the process of data preparation and we now approach the next step in our SageMaker pipeline.

Data Wrangler operates on rows and columns, but in order to execute the next steps, we need to prepare some metadata. Preprocessing step is repsonsible for reading files with offers and columns data from the Data Wrangler output and converting it to JSON that we can reference in our SageMaker pipeline definition script.

Under the hood, it’s just a generic Python environment with various data science libraries pre-installed, that can be used to perform all kinds of data preparation and processing tasks.

Once the data is prepared, we can proceed with training the model. We’re going to use XGBoost and create a model that performs a multiclass classification. In order to account for the fact that our pipeline is automatic and does not involve any manual tuning, we will run a hyperparameter optimization. It will generate several models with different parameters and the best performing model will be deployed to production.

Even with the best performing model at hands, we still want to see if it’s worth deploying it to production. The suitable metric to evaluate a multiclass classification model is a hamming loss - a percentage of samples that were not predicted correctly:

Our pipeline will only proceed with models that have a Hamming loss of 40% or less. Models that don’t fit into that threshold will be discarded and previously deployed model will remaing in production.

The last step in the pipeline is model deployment. It is implemented by a Lambda function that loads the model into an S3 bucket that SageMaker inference endpoint uses to access the models, updates the model metadata in a DynamoDB table and performs a cleanup.

We can now finally call our API and get predictions. The API requires only one parameter - a campaign ID:

The model predicted that the current user will most likely convert with offer 41183105-2ed4-46c6-b654-2f0081aa652d and the possibility that this offer is the best for this user compared to other offers is slightly above 50%. The response also contains detailed information about input and output data, as well as the model information.

The API also supports an optional input argument that can be used to provide the model with an input directly, without analyzing the current user’s IP address and user agent string. The input format is a CSV without column names and the order of columns must be the same as described in endpoint.columns field:

Building a machine learning based system is a complex subject that requires a committed effort of a team of engineers and analysts. The ability to sustain constant evolution is one of the most important traits such system must have in order to succeed. Leveraging modern tools and cloud services designed with this in mind opens up a possibility for even small teams to build powerful and sophisticated ML applications.

CTO of Devalent and an AWS Certified Solutions Architect

Have questions about what Develant can do for your business? We are here to answer all of them.